Today, I received very sad news about expiry of the 60 m trial licenses in New Zealand. On October 24th, the 60 metres band in New Zealand will become silent.

I very well remember the first contacts back in January 2018 and at the time, I did not know about the very good propagation between Europe and New Zealand on 60 metres. Many contacts followed and over time, a lot of experiments followed, trying to shed more light on the exceptional good propagation. Testing propagation to ZL became a regular activity and led to close friendship with some ZL amateurs. An empty space on 60 m will be left.

The NZART wrote that the New Zealand Defence Forces disapproved renewal of the licenses because “having access to the highest quality HF spectrum is very important to support their new platforms, tactical radio equipment and refreshed HF site equipment, all soon to be delivered. Additionally, access to HF is a key part of their communications plans both in NZ and to support our forces overseas.”

This view raises serious questions. Although all radio users will agree that quality of radio communications depends on the quality of the spectrum, the NZDF remarks suggest that the new equipment is susceptible to interference. It puzzles me, because I assume that developers of modern HF communications equipment consider protection against interference a key design criterium.

Without proper protection, it would be easy to jam and on top of that, nowadays the HF bands are polluted with over the horizon radar, pirates, man made noise etc. I cannot believe that taxpayers money (our money) would be wasted to buy vulnerable equipment, which would be likely to become useless under harsh conditions.

The above reasoning of the NZDF is very doubtful and simply unjustified as explained above. One can only speculate about the true reasons.

Radio Regulations
In 2015, we got 60 m licences for 100 kHz and 100 Watts RF output (no EIRP limit). This was the European common proposal (ECP) for the WRC-15. Our (amateur minded!) administration assumed that the ECP would be accepted and allowed using the band, based on on a Radio Regulations article 4.4 exception, applying the ECP. Our defence forces did not object. No complaints were ever received (confirmed by a freedom of information request by me). But the bureaucrats stepped in. A letter from the Belgian authorities was received by our administration, requesting to “align” with the WRC-15 allocation. Our administration did not want to risk a formal complaint and our allocation shrunk to 15 kHz and 15 W EIRP.

France, Russia and the NATO were against the ECP. A likely assumption is that the 100 kHz / 100 Watts did not make it because of objections from these governments and the NATO.

International Treaty
Governments and their servants seem to forget that they represent us and not themselves. The Radio Regulations are an international treaty and governments simply have to implement these. Exceptions can be added to the RR, but no footnotes of New Zealand were found. So RSM, about time to tell the NZDF that they have to accept a 15/15 allocation, which, as I explained, hardly has any noticeable impact to their HF systems. Given the very long list of NZDF licences in the RSM register, having access to possibly one channel less can’t be as important as they claim.

Quality spectrum?
Below, two waterfall pictures of the spectrum around the 60 m amateur band, taken from the ZL1PWM web SDR around 18:15 UTC. Over the horizon radar (OTHR) all over the spectrum (from China?), even in the 6 MHz broadcast band, a number of pirates (from Indonesia?) and other sources of interference, along with just a few digital communications signals, assumed to originate from manly military communications. Being early in the morning, not many pirates were active, but more of them are heard during the evening hours. 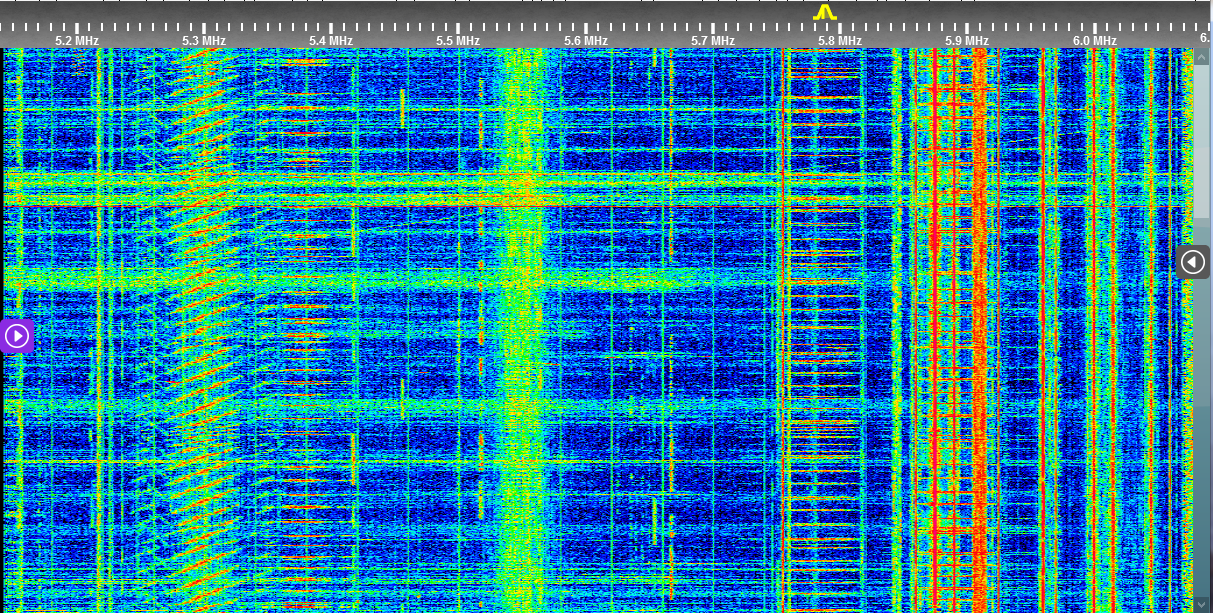 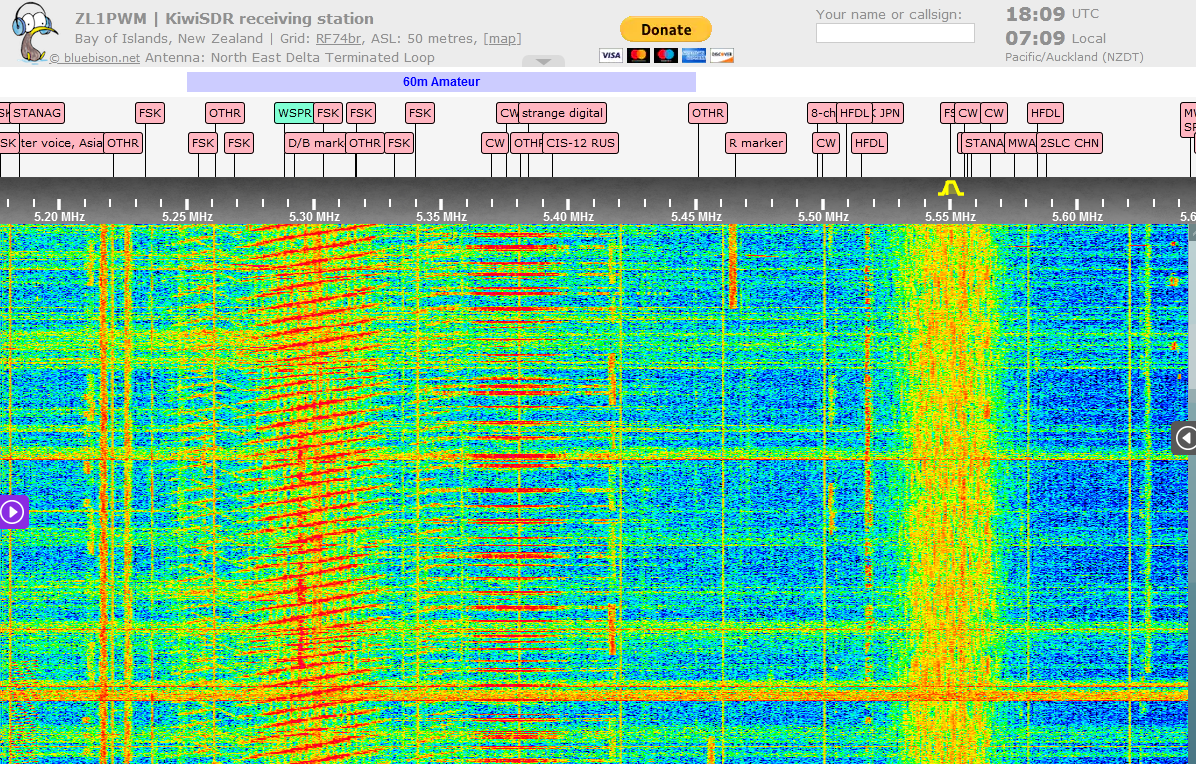