Mostly during the morning hours around sunrise, FT8 beacon transmissions can be heard on the 60 metre band.

The purpose of these transmissions is to collect data for a propagation study. This is an ongoing project. An article which was published April 2021 is found here. Examples of graphs are found on page 5.

An ITU measurement campaign which spanned a long period, included field strength measurements of a 5 MHz transmitter in Canberra (Australia) as received in Norddeich Germany). The results of this campaign indicate that the signals were weaker during periods of high solar activity.

One of the objectives of the beacon transmissions is to investigate if current observations agree with the ITU campaign. Another goal is to see if propagation is reciprocal or not. There are reasons to believe that this is not necessarily the case.

Of course, I understand that for some, the transmissions could be perceived as a nuisance. I would like to emphasise that a group of radio amateurs in New Zealand and in Europe is actively participating and we exchange observations almost daily. Monthly files of WSJT-X of JTDX are sent to me for processing. Instead of just receiving (or transmitting WSPR), it is more attractive to be able to make 2-way contacts. Most of the times, the ZL and EU stations alternate by using the same even or odd periods at both ends.

Whilst transmitting, I actively monitor the band by receiving with the transceiver which sends the beacon messages, plus simultaneous reception via the Maasbree SDR where I observe all periods and can identify possible traffic, which I could interfere with.

After the first complaint, even being certain that no spurious signals are seen on Maasbree, I took the trouble to measure the transmitted signal with a HP spectrum analyser. The spectrum can be seen on the picture. 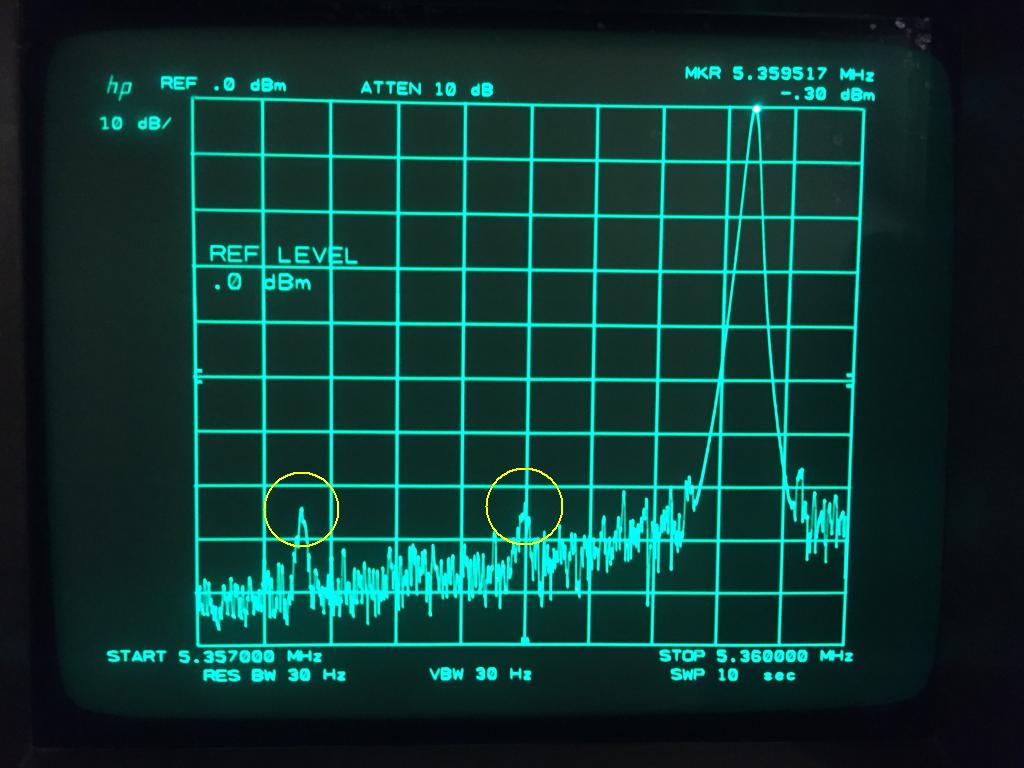 The measurement was taken with 30 Hz resolution bandwidth.The start and stop frequencies were 5357 and 5360 kHz (the 3 kHz “FT8 band”). The transmitter output was around 20 watts, connected via (power) attenuators to get about 0 dBm carrier level at the input of the spectrum analyser.

FT8 occupies a 50 Hz “channel” and the 30 Hz resolution approaches that bandwidth. I will leave all the details for what they are, but the spectrum clearly shows that at some distance, the noise is more than 70 dB down. It is not known if the noise close to the carrier stems from the Icom IC 7600 or the spectrum analyser itself. The two circles indicate two spurious signals which seem to be DA converter foldback. These signals are also more than 70 dB down. Nevertheless, I will have a closer look at the foldback effect.

The complaint of today was that my FT8 +20 dB SNR blocked reception of weak DX signals. Based on my measurement, it is practically impossible to have impacted weak DX signals. The FT8 decoding threshold is around -20 dB, give or take. So we have 40 dB difference between “my” +20 dB and a weak station around -20 dB. If we add a 10 dB margin, to allow for the fact that signals degrade as soon as interference nears the power level of the wanted signal, we assume 50 dB as being “safe” which implies that the interference level should be below -30 dB “SNR” .

As can be seen on the spectrum, broadband noise and artefacts are better than 70 dB down and it is obvious that my signal simply could not have any impact on weak DX in the given case.

At the time when I got the notice, I observed a number of stations with dirty audio, which is a common problem. It could well be that these stations caused interference. It even happens that multiple stations emit spurious signals, which can cumulate. I heard harmonics, feedback, DA converter artefacts, shack noises, computer beeps etc.

I heard stories that receiver AGC caused weak signals to go down, but that has nothing to do with any spurious signals. Having been active for a long time and seen many, many very weak signals, I never experience problems with possible degradations caused by AGC. Most modern transceivers have a wide dynamic range and low noise oscillators and with proper adjustment, FT8 should work fine in a wide range of signals.