The past few years, a lot of time was spent into analysing ionospheric propagation on 60 metres. A number of observations were published on this website showing very remarkable effects, of which signal peaks at specific times were most pronounced. These peaks occur during openings from Europe to the Oceanic region. Long path propagation to New Zealand appeared to be very common and with incredible low transmission loss.

A paper, which reports the findings, is nearing completion. In the meantime, an article was prepared for the New Zealand Break-In magazine, which is published by the NZART. It is expected to be published in the May-June issue. Supplemental information will be available on this website.

This post is the first in a series, providing additional data and backgrounds.

Dipoles are very popular on 60 metres, but the true gain is difficult to establish. Low dipoles radiate most energy upward, but the do not provide much gain with low angle rays.

This figure provides an example for a low horizontal dipole. 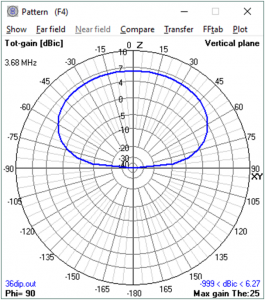 If the elevation angles are not known, the gain is simply a matter of educated guesswork. As will be shown in the article, elevation angles follow from extensive ray tracing calculations, which reduced the uncertainty.

The observations led to estimated transmission losses which were much closer to the free space loss than estimates by many propagation prediction software. The loss from PA2S to VK7BO was estimated to be around 142 dB (relative to an isotropic antenna).

The software VOACAP, for example, predicted losses between 160 and 170 dB. If this were the case, contacts would be extremely difficult.

This is where the journey started, searching for explanations for the much lower than predicted losses. Over time, more surprises followed, like very good long path propagation to Fiji and New Zealand.

Good contacts, even with SSB, were made between Europe and New Zealand with as little as 10 Watts!

The research journey led to a number of interesting discoveries. This is the first part of a series of articles, based on the propagation study.

In the next episode, I will guide you to the treasure chamber of the nighttime ionosphere.