It appears that VK7BO reports stations from Europe more often. The screenshot below was taken from PSKreporter. Stations from the UK, Netherlands, Bulgaria and Ukraine were heard between 16:00 and 19:00 UTC on Jan 2nd, 2016. 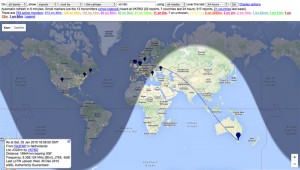 From a propagation perspective, this is interesting. I had a look at the greyline map for the reported time (credits to Fourmilab, enter the date/time near the bottom of the page). It looks as follows: 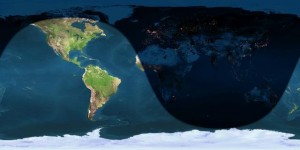 The path is in the dark. It crosses the equatorial zone, where the critical freqencies are relatively high, so this might explain things, but whatever the explanation, the distance is impressive! 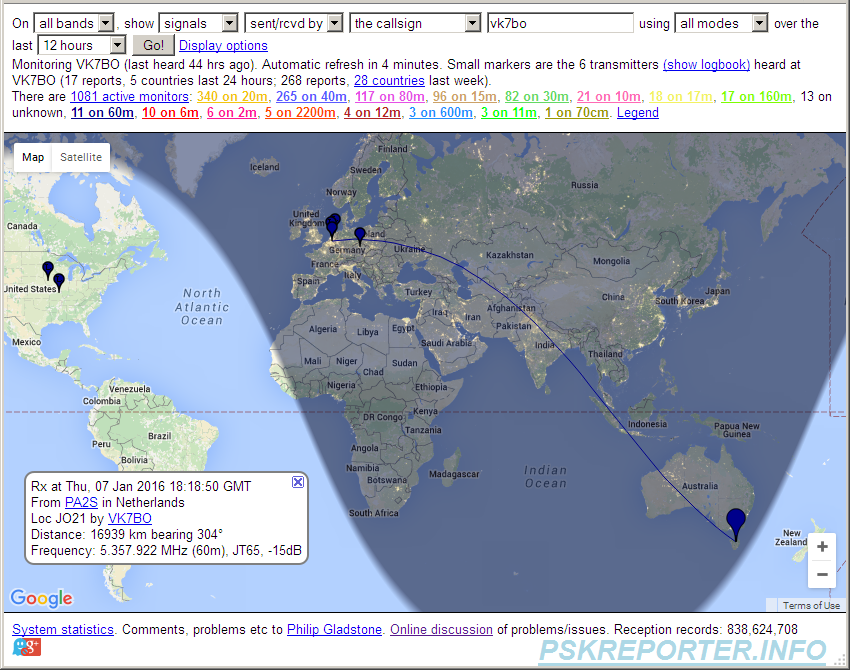 Discussion on QRZ.com
Alan replied on a news item on QRZ.com about the current situation, that 60 is not allowed in VK land.

You would think that something could be done for us in VK.

I am rxing good sigs on 5357.0 USB dial on JT65 from Europe and elsewhere daily. Also on WSPR 5287.2. The DX stations thrilled to be received 17,700Km away. I have never received any VK services on these frequencies. I have monitored 60m from various countries over a number of years. I think too much is made of the sometimes allusive ‘other users’ argument.
An excuse to do nothing.

Because of Australia’s large size, assignment of frequencies is easier than it is in say Europe where the countries are so close. So many other countries have access to this band. the list is growing almost daily.

Amateurs often operate under a secondary , non interference basis , nothing new there, we manage. I did it on 80m AM 55 years ago.

The WIA have a few frequencies for emergency use, even news broadcasts, so maybe there is hope? I note the frequencies used by the WIA are ‘ land-mobile licenses and use land mobile callsigns’. If the frequency is used by amateurs who broadcast news for amateurs you have to ask why, makes the books look tidier I suppose. Talk to the ACMA about this and they use the licence category as an argument not to allow amateurs access.

I did hear maybe a 15 khz segment around 5300 khz may be possible. I think narrow band, low power modes would be the best, little room for SSB. Of course its important that our frequency is the same as used in other countries! 60m is a good band, having some of the characteristics of both 40m and 80m.

I am a member of WIA but they seem to take the government line on this, I feel they should be more positive and look after the interests of the broader VK amateur community. Almost every day I am asked by overseas stations when will VK be able to tx on 60m.

We all know the longer they take to make a decision (years?) the chance of illegal operation becomes more likely.

The recent posting on qrz was one the most negative things I have ever read on the subject. I thought it was a government statement hi! This is an embarrassment for Australia, such a forward looking country in so many other ways. I know it requires work by the ACMA and the WIA but surely its possible to find us a small segment? I am lobbying hard but I feel rather lonely. I hope I get to PTT on 60m before I go SK.

I note that the ACMA ‘expect’ to have future discussions with the WIA on this subject.
How can it be that the Netherlands amateurs were granted a large part of 60m within three weeks of the WRC 2015 decision and yet the outlook here in VK is so bleak? Other countries have also acted swiftly for its amateurs.

Oh, I forgot to mention the elephant in the room, the high power OTHR that wipes out land mobiles and others over a wide swathe of the spectrum. Particulary bad on 3/4/5 and 6Mhz. Sometimes wider. So much for safety of life and spectrum planning. Remember the Woodpecker in the 50s and 60’s? 50 years later and its still alive! We can and should do better than use 1950s technology.