I have been active on 50 MHz since 1978. It started with building a converter, because we were not allowed to transmit on 50 MHz in The Netherlands. At first, in the summer of 1978, only noise was observed. Television signals were the best I could get! But in the spring of 1979, I switched on my six metre rig and tuned… It was incredible: the ZS6PW beacon could be heard!

I have always had a tape recorder at hand in my shack. As soon as things got hot, the deck was started…

In early 1996, I put some clips online, using RealAudio coding. Bandwidth was a challenge. I used a 14k4 bps modem at the time…
As far as I know, I was the first to use this concept…
This page became very popular very soon, so I decided to add more clips.

In 2016, the clips were “remastered”. As internet bandwidth is no longer an issue, some clips are longer than before. Previously unpublished clips are available as well.

Here are the Cycle 21 recordings:

Although I monitored the band regularly after this event, it looked as if this was a one-off…

VE1AVX – 7 November 1979
It took until November before I heard a live voice on six. It was Bob, VE1AVX (Now VE1YX). Bob was in crossband QSO with G4BPY (who would obtain a special licence for 50 MHz some years later).

VE1AVX – 21 November 1979
At the time, I was a poor student. My budget did not allow me to invest in equipment. For 10 meters, I used a converted CB set, only putting out some 5 Watts or so. The antenna was a poor mans solution as well, it was a simple wire dipole. But I managed to make some crossband contacts. Again, Bob Billings VE1AVX had the honour of being the first.

Towards the end of the recording, the signal became much stronger, although Bob lost me on 10 meters because of QRM. 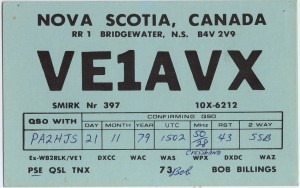 WB4YKI – 7 November 1979 – Only 25 Watts
At the time, I had an indoor dipole. Taking the extra loss of the roof into account, the antenna gain was well below 0 dBi…so WB4YKI with just 25 Watts impressed. He was working G5KW. 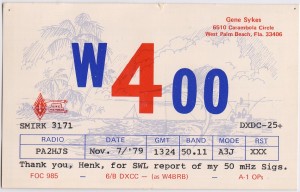