An excellent opening to New Zealand was observed on 11 February 2018. The station was switched on around 0700 UTC and several ZL stations came in with good signals.

At some point, I decoded 4 ZL stations at the same moment and the 4 calls shown on JT Alert was an unique and impressive experience.

Remote RX
Although some stations were contacted before, at the time the signals were very weak and the high noise level played a significant role here. Being fed up with the ever increasing ether pollution, a remote receiver was considered. Working for a company that installs telecommunications networks, we have storage facilities for various cables and HDPE ducts and the like. At the location where I usually work, the building is covered with aluminium plates, acting as Faraday cage. The distance to home is about 12 km.

Here is a picture of the antenna: 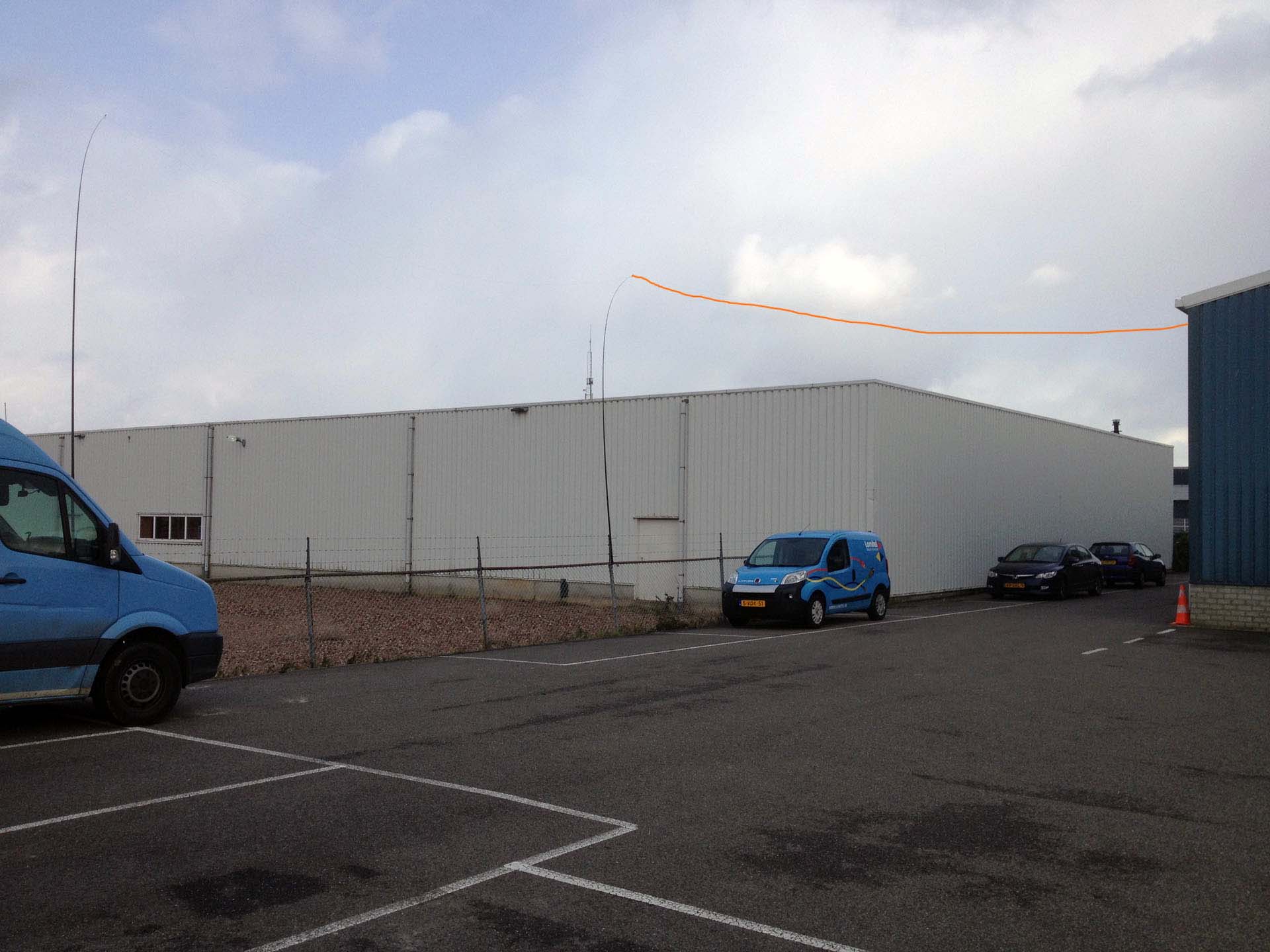 The antenna is made of magnet wire and is barely visible on the picture, so it was marked orange. The wire is about 10 metres long and connected to the receiver with an old home made tuner. Some surge protection was applied, hoping that static does not cause trouble. Where the wire enters the building, the protector should short circuit the wire to the aluminium plates, when triggered. Between the tuner and the receiver, some resistors conduct between the coax ground and a series resistor should act as a fuse. A second surge protector is used here as well.

A fibreglass fishing rods holds the wire at about 6 metres above ground. Some noise from electronic equipment is audible, so some work has to be done to get a quieter position (if at all possible).

Update 13 February: the extension of 10 metres to the second pole proved to be more noisy, it may be that the shorter wire is shielded by the buildings. So the antenna is now only about 10 metres long.

ZL party
On Sunday 11 and Monday 12 February, openings occurred. On Sunday, the noise level was exceptionally low at home (S5-6) and the remote RX worked even better. It may be that people were still in bed, not recovered from the Carnival festivities the night before. On Monday, the noise level was back to ‘normal’ with S7. Grr.
Using both JTDX and WSJT-X in parallel, comparing the two antennas was easy. JTDX was connected to the transceiver (TX audio) and RX audio from the remote, from the internet link to JTDX. This is done with a virtual audio cable (link).

The results were not only fabulous in terms of contacts made and exceptionally good signals, but analysing the signals later on was very interesting.

Let me first show the scatter graphs of the remote and home reports. Please note that the time was rounded to the minute and 30 second intervals can overlap. 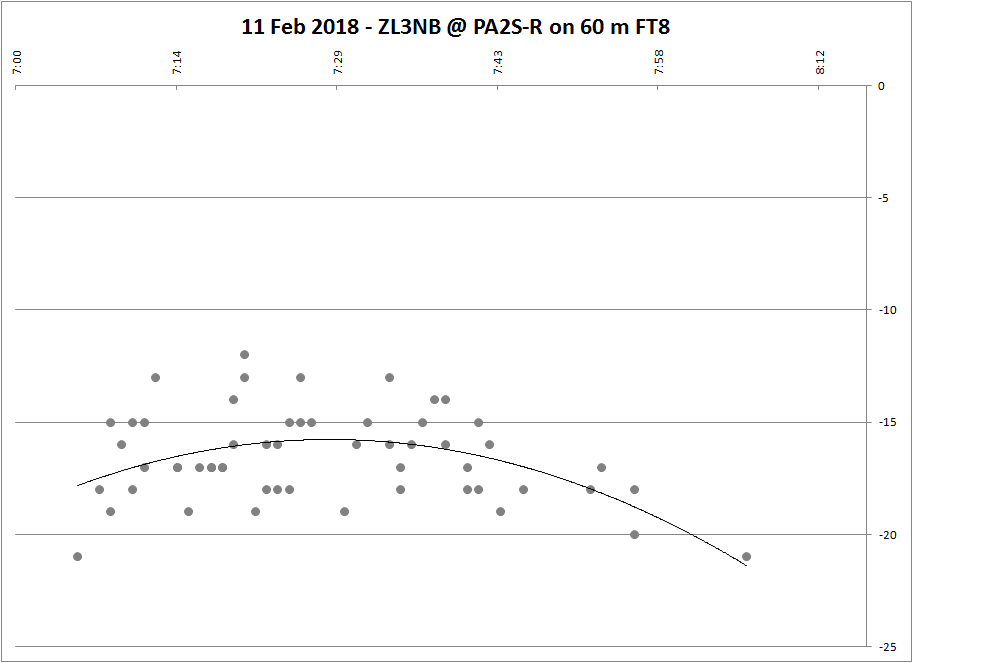 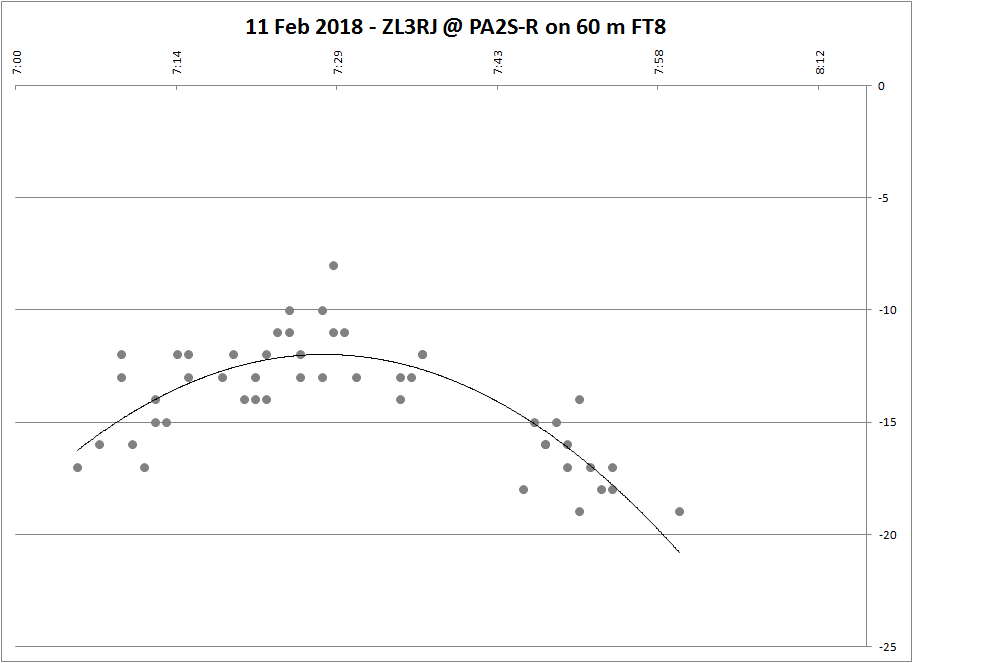 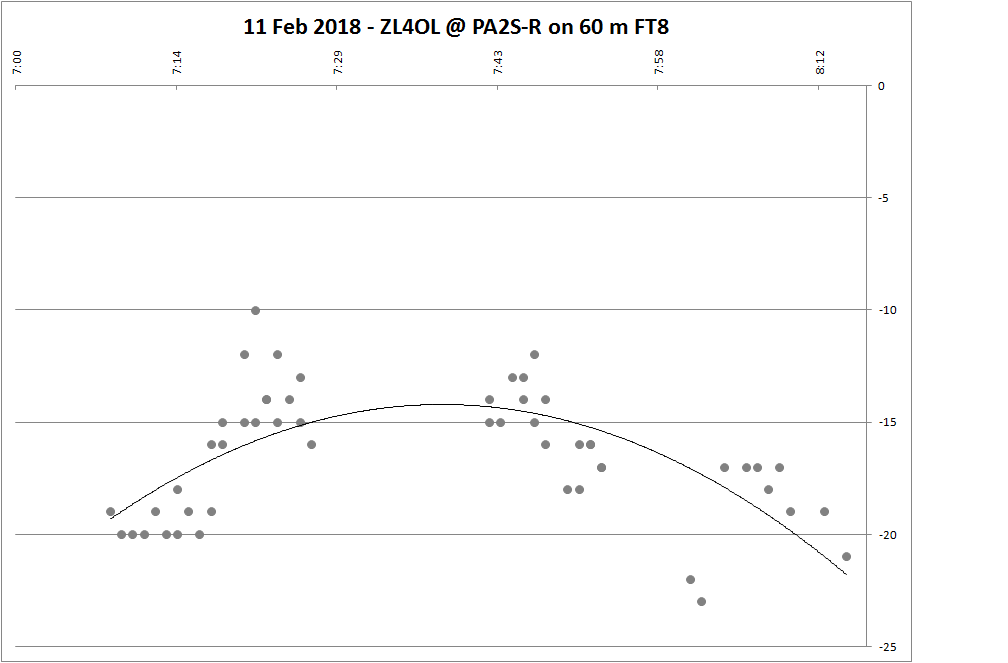 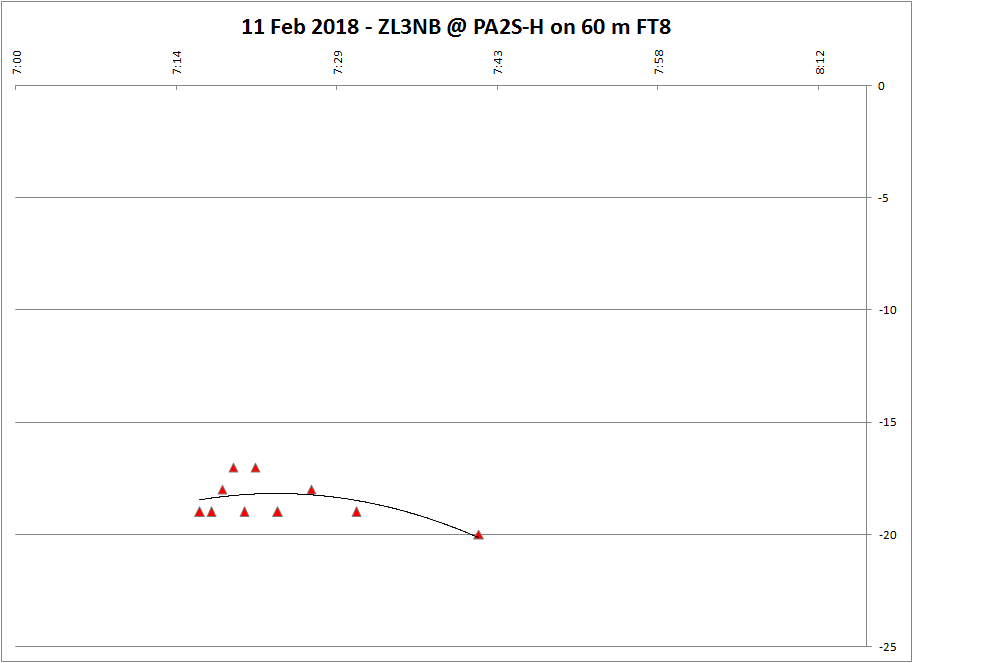 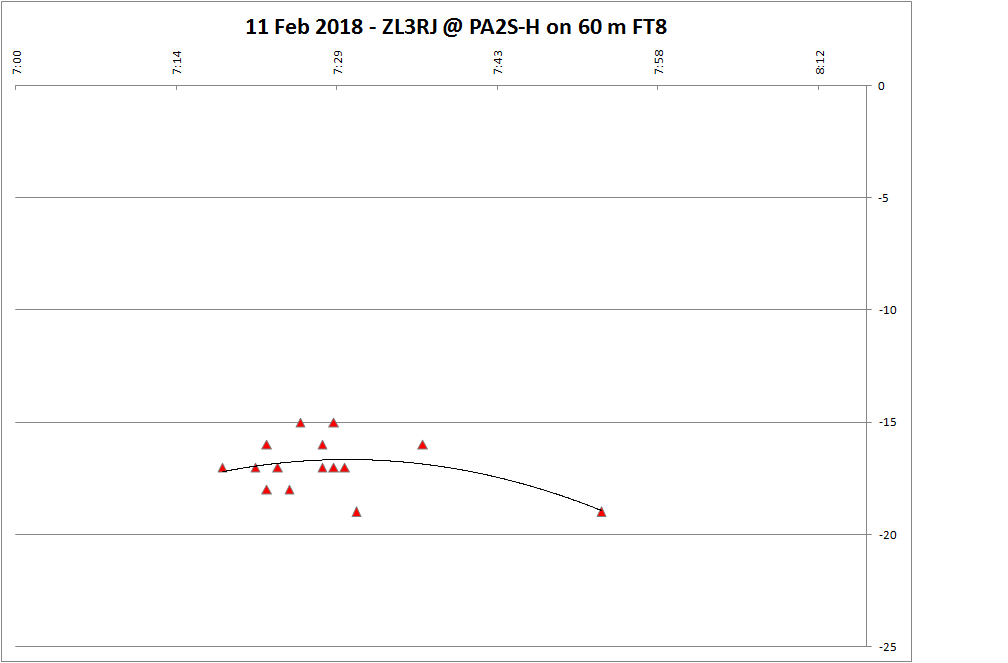 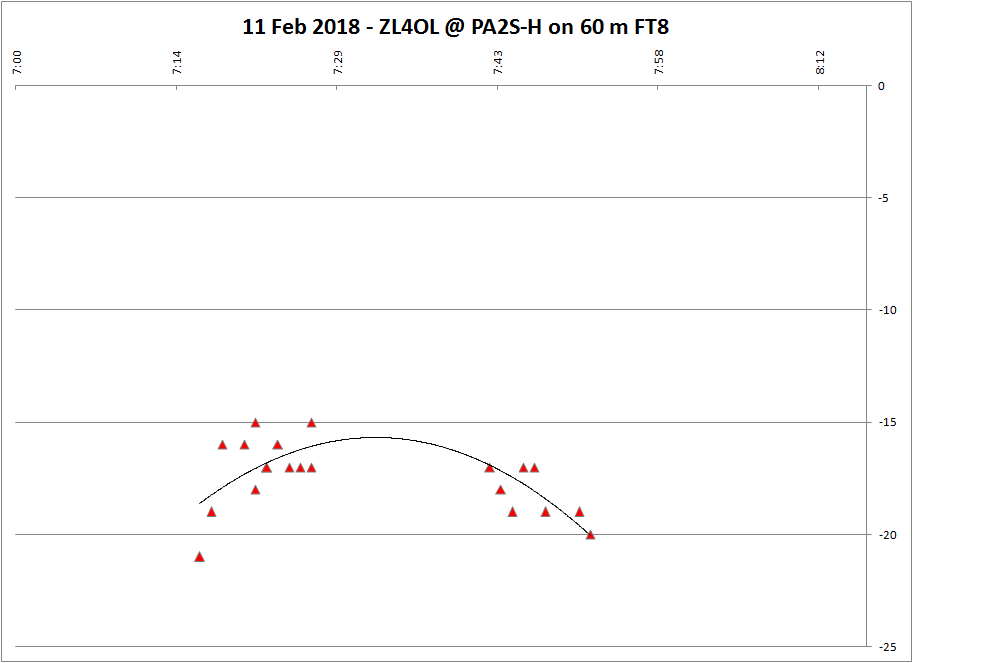 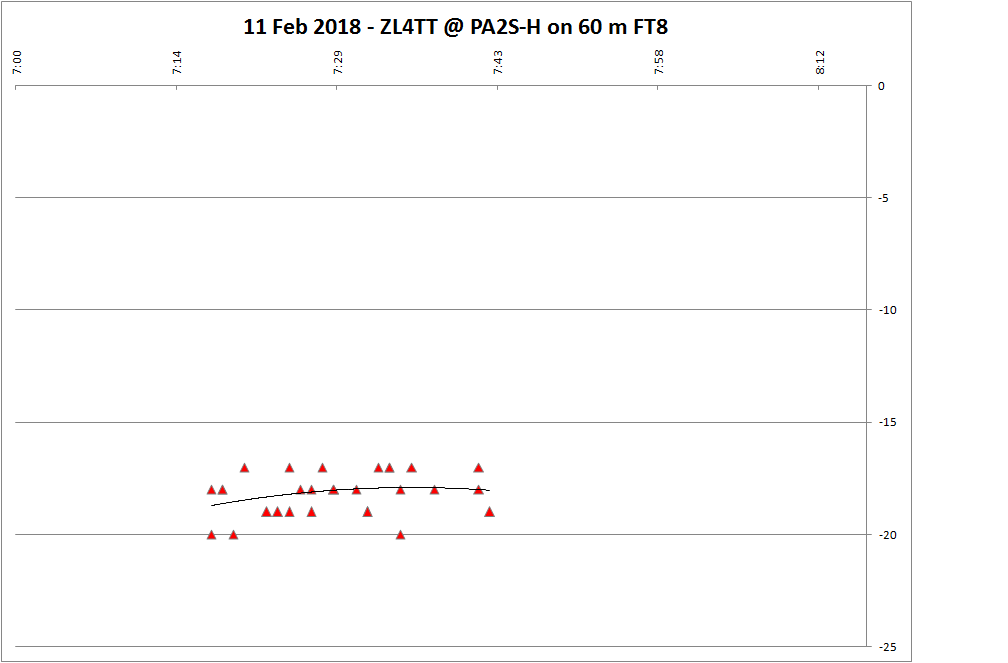 Next you will find the combined graphs. The home reception is shown by the red triangle markers. 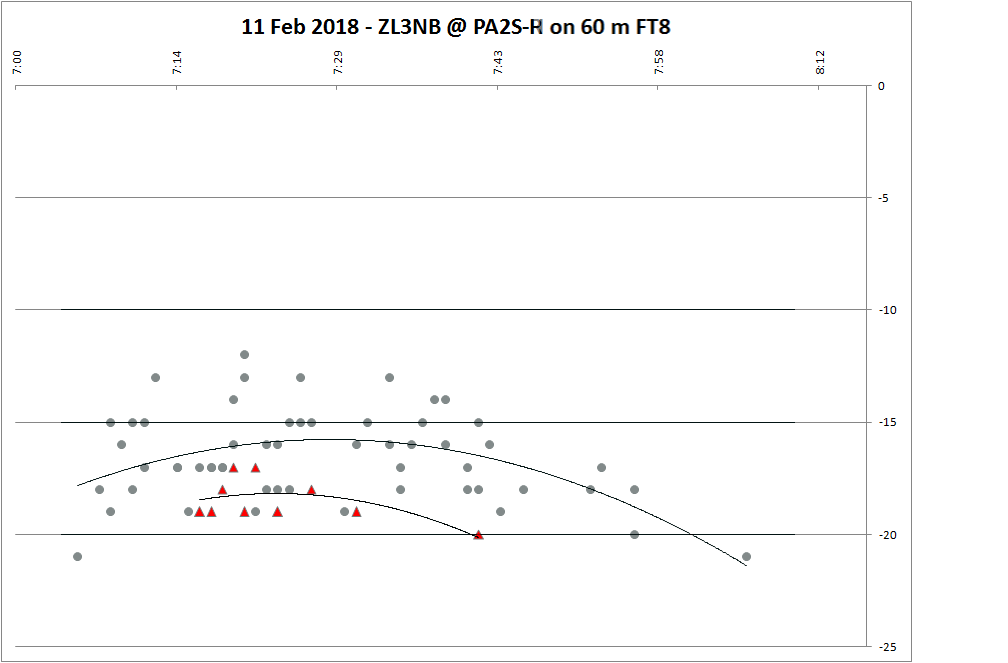 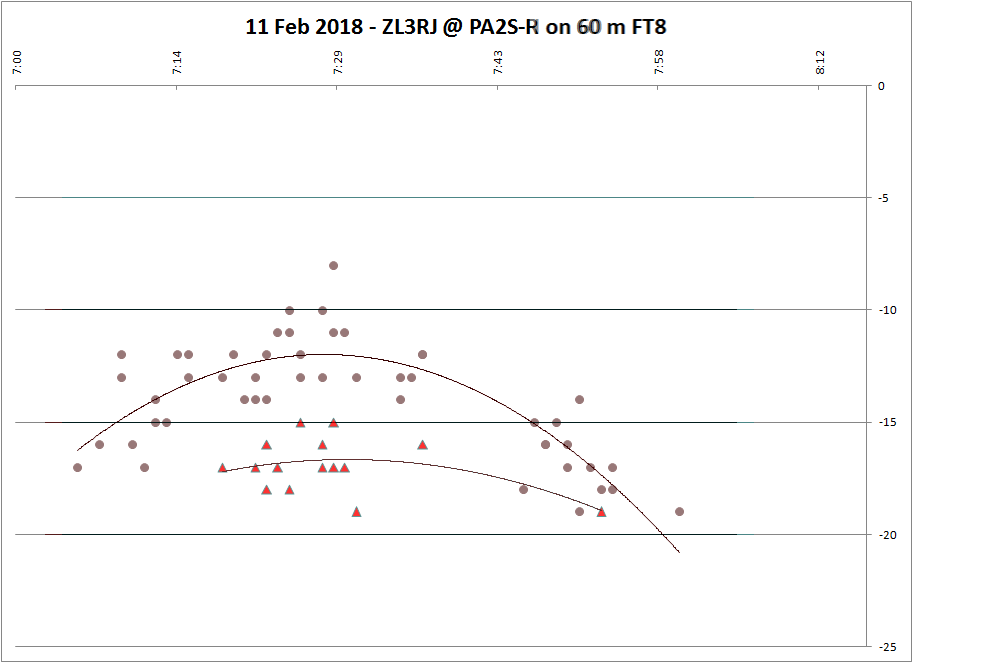 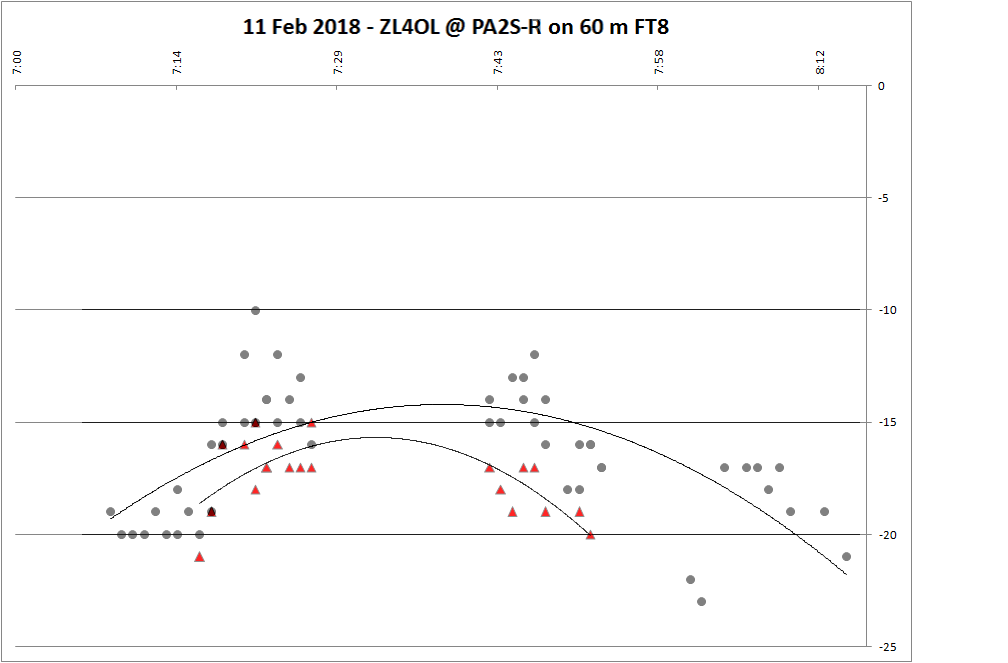 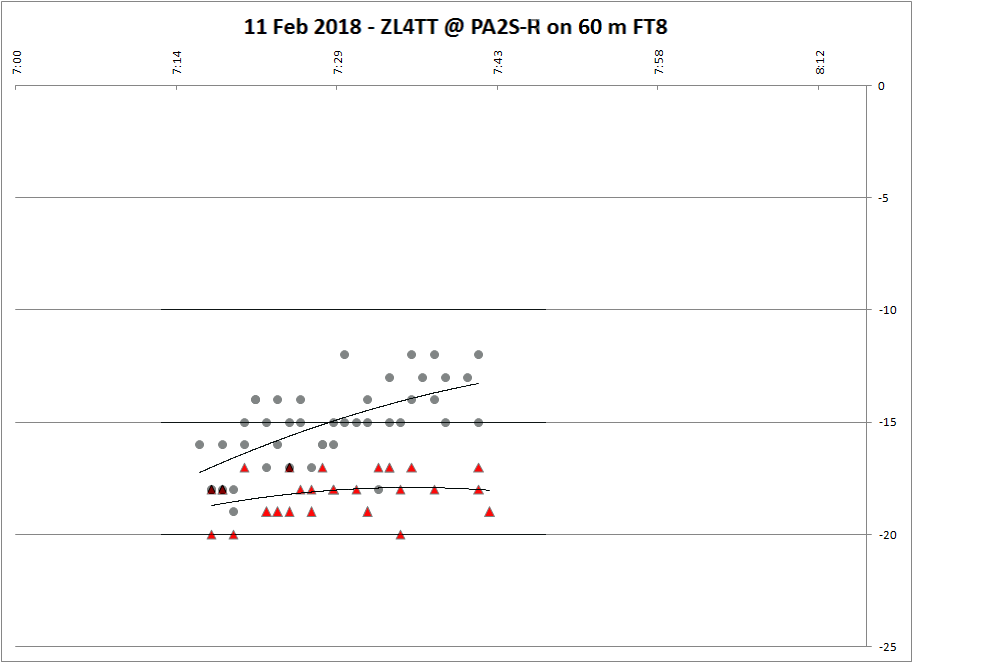 One would expect the signal reports to track each other on average, but that was not the case. The graphs below show that the remote and home signals difference varies over time, indicating that something like antenna pattern and environment are responsible for that. On Monday, the reports were less good, but the ZL3RJ combined graph shows that the patterns are different. This is a very interesting phenomenon.

Here are the Monday graphs, remote, home and one combined (the other had too few samples). 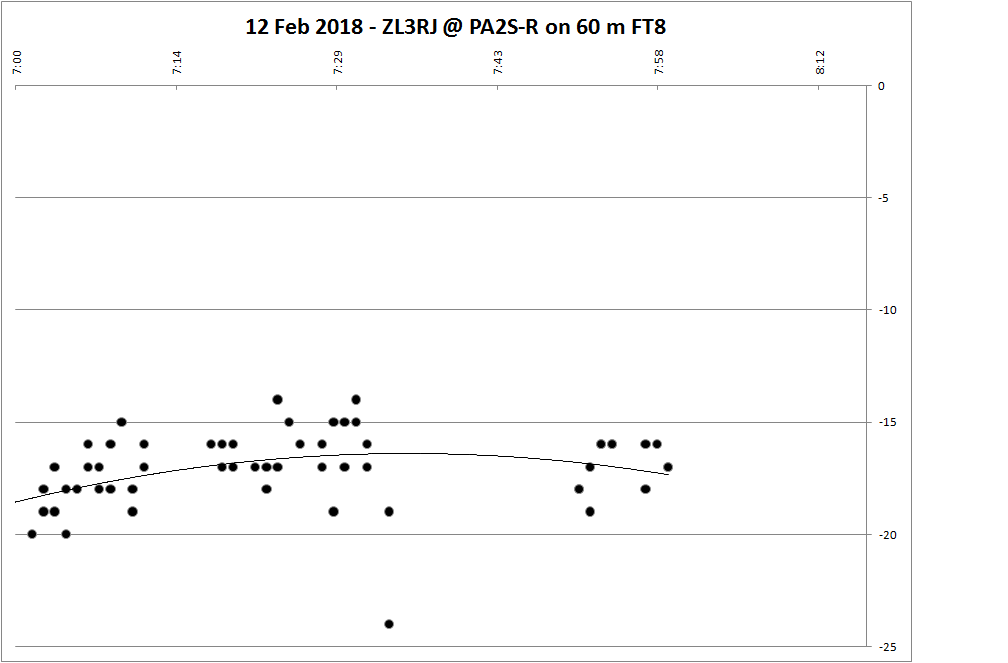 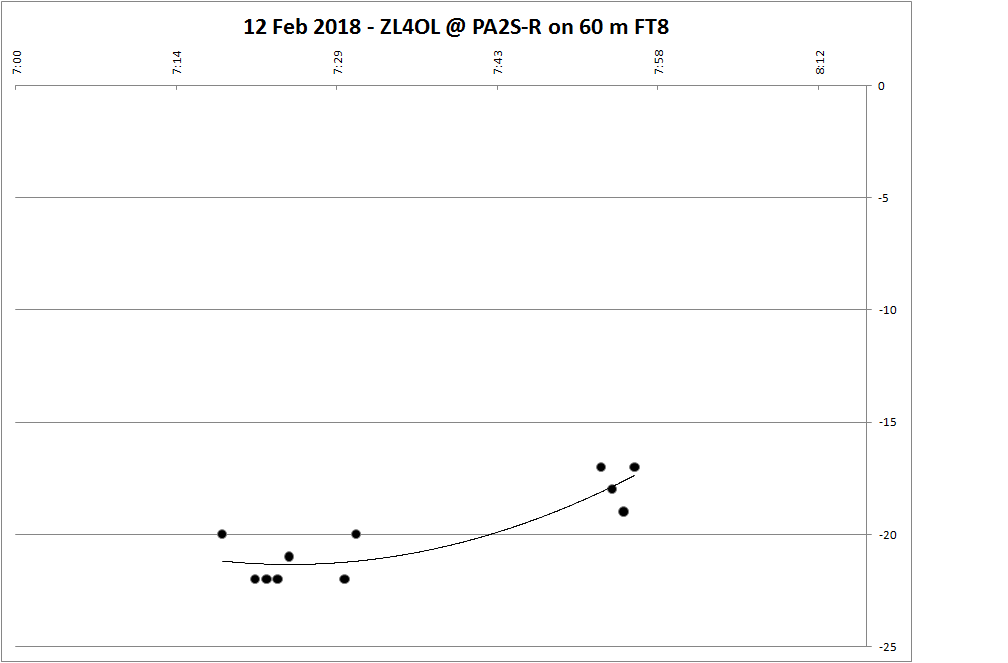 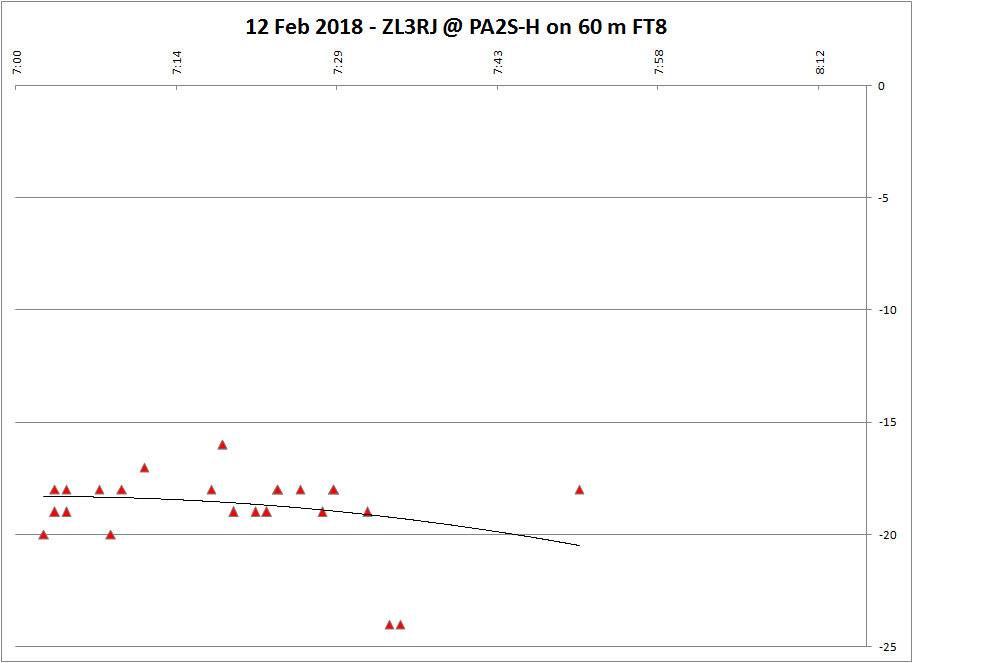 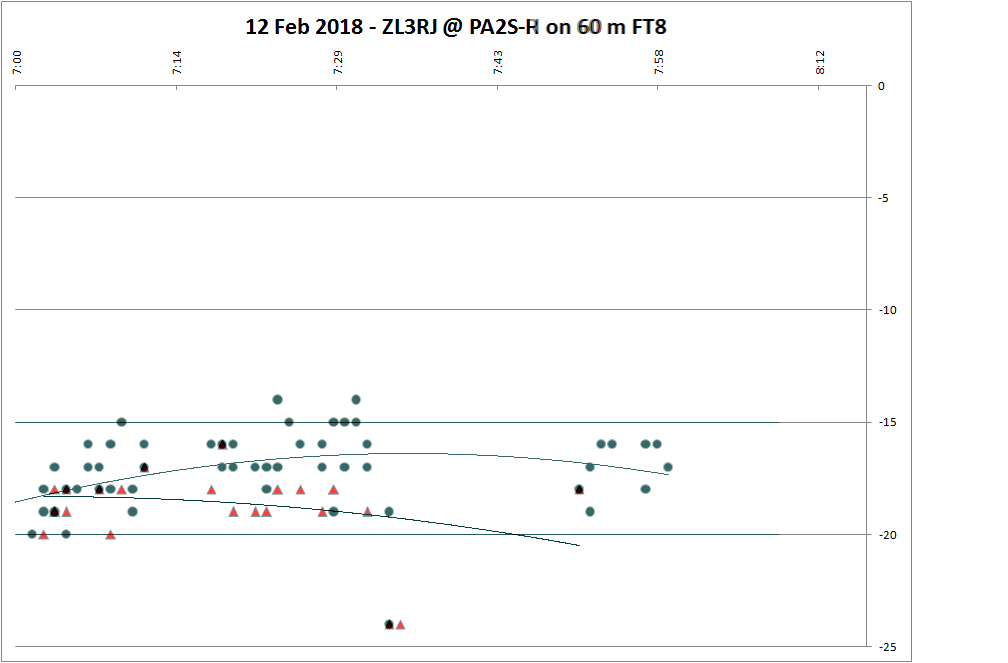 Over time, if openings permit, I will try to gather more data.

To conclude: I am grateful to the amateurs in ZL and their authorities for allowing this to happen!