We live in an age of ever growing numbers of electronic devices, that all have one thing in common: they need power and thus can be the source of unwanted emissions. Not only because of power electronics, but also because many of these devices communicate wireless.

A key problem is that we not only live in an electronic age, but also in a time where only money counts. Companies are struggling to get positive P&L figures, because competition is driving prices down and the obvious response is to sacrifice everything that is deemed not to be important.

The most annoying aspect however, is that the unwanted emissions are not at all necessary. It only takes a proper design to suppress most interference. There is no room for a balance of interests. With a handful of parts, most electronics will be free of harmful radiation. One would wish that car manufacturers could construct emission-free cars with so little effort!

EMC limits are a farce
The current limits can hardly be seen as limits. In previous posts, I explained that in situations with emission levels near the limit, serious interference will occur. Most amateur radio operators will experience interference, varying from “just a bit” if you are lucky, to “pull the plug” levels that force amateurs to search for alternatives, like remote controlled stations.

Especially in densely populated areas, the problem is substantial.

European member states should protect their citizens, but the truth is that nothing is done. Many governments are basically just protecting the industry and those who need it, are not at all protected. My legal textbooks state that protecting the interests of weak groups is one of the key elements in a democratic society. One only has to observe everyday life to see that the theory does not apply.

In The Netherlands, radio regulator Agentschap Telecom published a document (Dutch) that illustrates the situation. If an amateur receives an interfering signal in a worst case scenario (near the limit), one should expect S9 interference. The document states: “(…) an environment without interference does no longer exist. You have to understand that there is (in most cases) no legal protection. The only remaining option is to mitigate the situation yourself. (…)”.

This is in stark contrast with the European directive that “(…) member states should protect radiocommunications, including the amateur service, against interference (…).“.

This is why we should not accept this rubbish from our governments. It is likely that the situation in other countries will not differ much.

Short range devices
Another threat are short range devices (SRD’s). A EU decision allows SRD’s for “inductive applications” to generate 20 dBuA/m at 10 metres distance, on frequencies anywhere between 5 and 30 MHz. 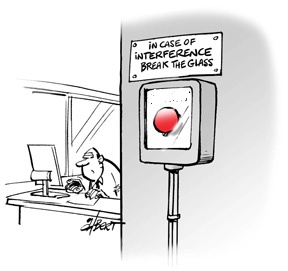 simple calculation reveals that a SRD will cause notable interference. On 5 MHz, for example, this level would generate roughly -60 dBm at our receiver. My background noise level is about -80 to -85 dBm (higher than ITU “residential” levels), equal to S7 on the S-meter. Interference levels at -60 dBm equate to S9+10 on the S-meter! (Recommend the linked site, with a number of online calculators).

Even if the device is more than 10 metres away, you will hear it, because the field strength drops 6 dB for twice the distance. At 80 metres, the level would be around the receiver noise level (and still detectable). On quiet days, my lowest noise levels are around S4, so about -100 dBm, in which case SRD’s up to hundreds of metres would cause interference.

It is not just these radio amateurs
Some may argue that radio amateurs are just hobbyists that simply have to accept spectrum pollution (as our administration states!). But not only radio amateurs are victim of the lack of legislation, other spectrum users will experience degradation of radio services, including vital services. Reliability will degrade, with inevitable consequences. Public interests are at stake, not just a bunch of weird hobbyists!

Economic impact
The IoT also has a notable negative economic effect. Mobile networks have to increase power levels or use smaller cells. This will impact the integral cost of ownership. I expect that the spectral efficiency will degrade, because if operators have to plan their networks with increased target field strengths, the neighbouring cells will suffer more interference and that requires wider spacing of cells (using the same frequencies).

At the end of the day, the industry may think that money can be saved by less strict EMC design, but that is a false promise, as others will get the bill. It resembles many cases of environmental pollution, we think to save money by throwing away waste, but cleaning up will be far more costly than the initial saving.

Taking the problem away will take tens of years. Even if limits would be reduced today, it will last long before the lifetime of the vast amount of electronic devices has expired.

Suggested actions
There are various actions, that could be considered. Just to name a few:

VERON Assembly
In January, I submitted a proposal to our regional chapter of the VERON (one of the amateur radio societies).

The proposal is about strengthening the efforts with respect to EMC and to take initiatives and to define policies.

For me, this remark was very disappointing. It suggests that the VERON sees EMC as “business as usual”. How on earth will amateurs be triggered to take action?